A battleship is a large armored warship with a main battery consisting of large caliber guns. During the late 19th and early 20th centuries the battleship was the most powerful type of warship, and a fleet of battleships was considered vital for any nation that desired to maintain command of the sea. 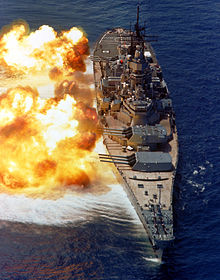 The firepower of a battleship demonstrated by USS Iowa

The word battleship was coined around 1794 and is a contraction of the phrase line-of-battle ship, the dominant wooden warship during the Age of Sail. The term came into formal use in the late 1880s to describe a type of ironclad warship, now referred to by historians as pre-dreadnought battleships. In 1906, the commissioning of HMS Dreadnought heralded a revolution in battleship design. Subsequent battleship designs, influenced by HMS Dreadnought, were referred to as “dreadnoughts”, though the term eventually became obsolete as they became the only type of battleship in common use.

Battleships were a symbol of naval dominance and national might, and for decades the battleship was a major factor in both diplomacy and military strategy. A global arms race in battleship construction began in Europe in the 1890s and culminated at the decisive Battle of Tsushima in 1905, the outcome of which significantly influenced the design of HMS Dreadnought.The launch of Dreadnought in 1906 commenced a new naval arms race. Three major fleet actions between steel battleships took place: the decisive battles of the Yellow Sea (1904) and Tsushima (1905) during the Russo-Japanese War, and the inconclusive Battle of Jutland (1916) during the First World War. Jutland was the largest naval battle and the only full-scale clash of battleships in the war, and it was the last major battle fought primarily by battleships in world history.